Get to know the wonders

Kefalonia has to offer!

The famous Myrtos beach
seen from above

The charming village of Assos

The natural beauties attract many greek and foreign tourists, especially during the summer. The slopes of the Ainos mountain, planted with the rare variety of the Cephalonian fir-tree, the enchanting and clean beaches, the landscapes with verdurous plantation, lakes with phantasmagoric caves as well as areas with naked rocks, alternate their images and offer a charming variety. Kefalonia island is a place that leaves no one unimpressed.

"Island of oddity" have calles it because is has so many strange and rare phenomena (mainly geological features).

Makris Gialos beach
at the area of Lassi

We also have to note that those geological phenomena are unique at the islands of Ionion sea and especially Katavothres is a uinique phenomenon in the world where the waters enter from one side of the island and exit from the other.

Kefalonia is an island of incomparable beauty. For sure it is one of the most suggested destinations for the visitor.

Between the resorts of Argostoli and Lassi are the villages of Peratata and Travliata and, above them, the remarkably well preserved Venetian Castle of St George (Agios Giorgios) with coats of arms decorating the massive bastions, one of which conceals a secret tunnel which ran to a lagoon in Argostoli.

The original castle was Byzantine and probably built in the 12th century. The external walls that survive today were constructed by the Venetians in 1504. You can still see cannon placements, observation posts and the remains of a bridge. The castle is usually open in the he summer though sometimes closed for restoration work. Check in the village first.

Beneath the castle walls is the Kastro with remains of houses and panoramic views over the island. There are the remains of churches and a welcome cafe, bar and restaurant. Peratata itself is also home to the gorgeous monastery of Agios Andreas filled with 17th century frescoes and its prize relic, the sole of St Andrew's foot. It also has a notable icon collection.

The road leads to the village of Lakithra, where Lord Byron wrote his epic Don Juan. The view over the plain below are astonishing and on a clear day you can even see the island of Zakynthos.

Some 120 almost vertical steps, you can find yourself in the cool, damp limestone caves of Drogorati which bristle with stalagmites, stalactites, sodium lamps and camera flashlights.

This is not caving in the raw but the homogenised tourist version, with souvenir shops to help you on your way. The main cavern remains impressive despite the visitor trappings and is even big enough to host the occasional orchestral concert.

Drogarati's Cave was unearthed 300 years ago when a strong earthquake opened up an entrance into it. It's about 60 metres deep and was first opened to the public in 1963.

It appears to be part of an extensive cave system but the surrounding caves are difficult to enter. Many of the limestone stalagmites and stalactites have been broken or damaged, some by earth tremors, others by vandals.

The largest part of the cave is called 'Sala of Apotheosis' a reference to its very good acoustics and the reason it is used for concerts and other performances.

At nearby Melisani boatmen ferry visitors around an underground lake which has a collapsed roof, virtue of an earlier earthquake.

The underground lake is approached down a long and dark tunnel. Light pouring in from the hole above, and the brilliant aquamarine water below, make for an eerie blue experience.

But the boat ride is very short and highlights are few. Guides are reduced to pointing out the likeness of some of the odd looking stalactites to the shapes of various zoo animals.

Visitors walk down a steep ramp and through the cave entrance where row boats are moored. Taking a boat ride is the only way to see the Lake Melissani cave.

Melissani is also called the Cave of the Nymphs after ancient artefacts that were found during archaeological excavations in 1951 and thought to be the remains of a Minoan culture. Pottery plates depicted the god Pan and several nymphs - hence the name.

Lake Melissani is nearly a half a kilometre from the sea and a mixture of salt and fresh water. Another cave system adds fresh water to the sea water raising the surface to about a metre above sea level. The water is about 100 feet deep so don't fall in. It flows sedately from one end of the B shaped cave to the other, entering another narrow cave system to emerge into the sea at Kalovethres.

The best time to see the spectacular light effects from the hole in the roof is at midday when the sun is directly overhead but the effect is impressive at just about any time provided the sun is out. Sunshine hits the turquoise water and floods the cave with a brilliant blue light. Where the water went was once a great mystery - solved in 1959 by tracking the slow current with dye.

Crystal clear waters, deep blue, blue-green, as they mirror the green nature… This is what you will find at whichever beach in Kefalonia you choose for your dives and to enjoy your swim! The more centrally located ones are organized with sun beds and parasols, but you will find numerous beaches, equally beautiful, without, however, the human intervention, such as Koutsoupia in eastern Kefalonia – to reach it you have to take the path Antisamos – Poros.

One of the most famous beaches in the world, Myrtos, is located on the west side of Kefalonia. It belongs to Pylaros and is very close to Assos. With many awards – and not without reason, as you will see for yourself just from gazing at it from above.

The ‘Hollywood’ Antisamos will also not leave you unsatisfied. The beach is wide and long, pebbly, with turquoise, deep waters. It became known worldwide, since here were filmed quite a few scenes for the movie “The Captain Corelli’s Mandolin” and it faces towards the channel with Ithaca – across the sea, you can see the southern part of the adjacent island.

The uncanny Xi beach with the ruddy sand is located in Palliki. Here you will also find Petani, with its steep cliffs and spectacular sea and the beach Kounopetra to the south, with the unique phenomenon of the stone with the perpetual motion in the sea!

Makris and Platis Gialos gather the locals from Argostoli, under the sounds of the music from the beach bars, while the sandy beach of the cosmopolitan Skala, that stretches out for kilometers, hosts primarily the occupants of the large hotel complexes of the area.

The tiny village of Assos is crammed full of whitewashed buildings and houses, giving it an unmistakable character and charm. Assos enjoys a scenic setting alongside a peninsula, next to an imposing Venetian fortress.

Those looking for something different to the endless beach attractions of Kefalonia should give a trip to Assos serious consideration, where you can enjoy and leisurely afternoon hike, some superb vistas and an appealing historical ambiance, which is simply not to be missed.

Mount Ainos is the main mountain range of Kefalonia and the third highest in Greece with a peak at 1,626 metres. It was declared a National Park in 1962 and it's a great place for nature lovers and hill walkers.

There is a six kilometre walking trail through the park but it is rough, tough going and at the highest point, just where you need a cantina, only has some radio masts and NATO radar station.

The hillsides are known for the long, pencil-thin endemic Kefalonia pine trees and, if you are really lucky, you might catch a glimpse of the wild horses that live on the south eastern slopes. Pretty much wherever you are you will get amazing views over the island. 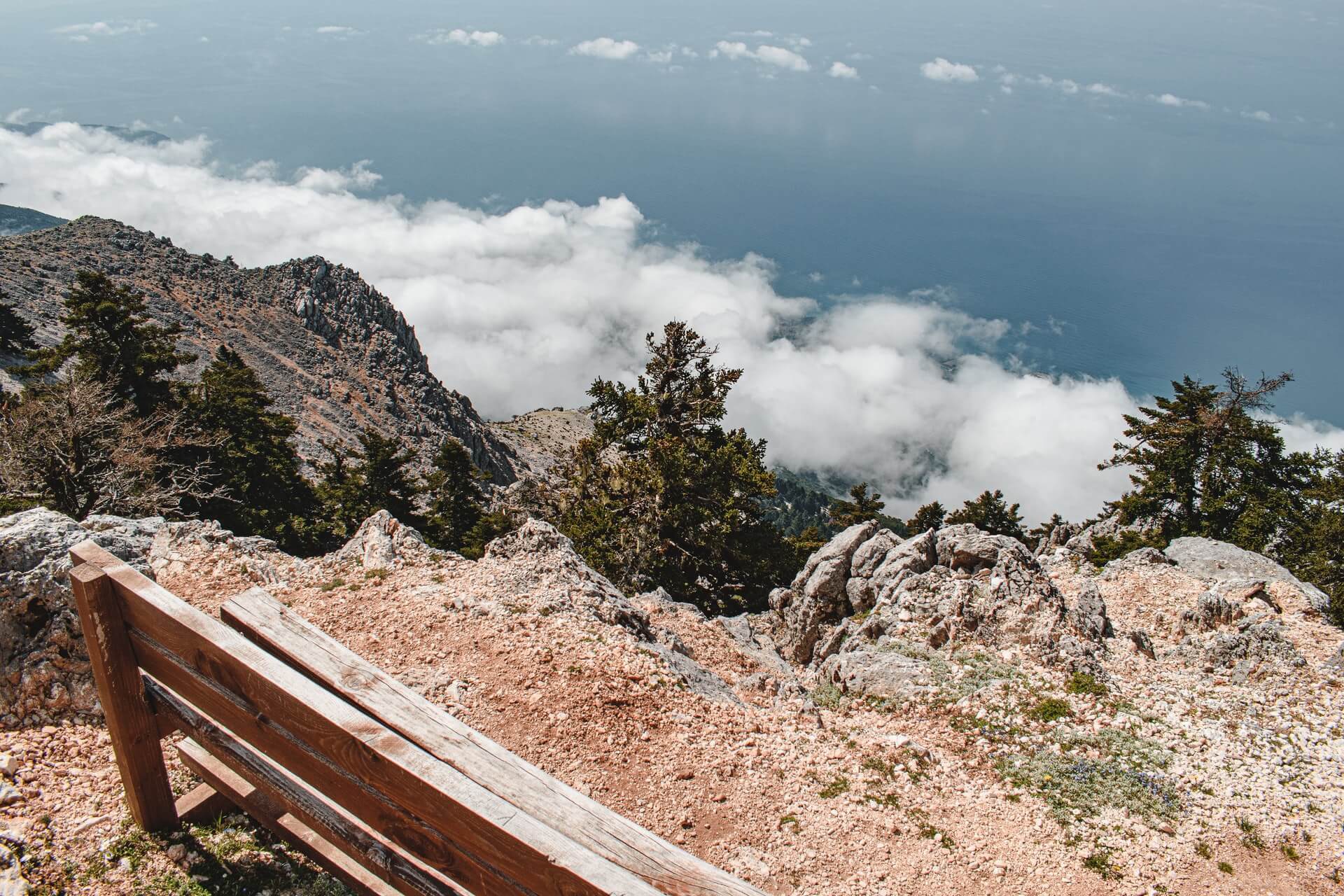 In the first room it exhibits findings from Sami, Fiskardo and Skala which date back to the Paleolithic and Neolithic period. Here you will find flint tools, pottery, ceramics and precious miniature vaulted tombs from the Mycenaean period.

In the second room there are findings from the Mycenaean period which present the special edge on the island of Kefalonia. Items come mainly from graves, which were very prosperous in the history of the island period.

In the third room there are findings dating back from the 5th century BC when Kefalonia was divided into 4 city-states (Pali, Krani, Pronni and Sami). In this room you will see the pitchers fronm the 8th century BC, marble head of Silenus, plastic vase in form of a slave, objects from cemeteries in Fiskardo, burial three columns, a marble female head and part of the mosaic floor of the sanctuary to Poseidon in Lixouri.

The monastery is built in a beautiful location. It was named after the green gardens in the region, exploited by monks, in order to make worth living. It was built during the 17th century. Inside the church you will see many after-Byzantine icons and various ecclesiastic heirlooms. Also in the monastery are saved the remains and the heads of various Saints. Very close to the monastery is the church of Saint Paraskevi of Tafion and Drakospilia.

Today it operates as a male monastery.

The Byzantine monastery of Saint Andreas is located in Peratata. At first the monastery was dedicated to Panagia of Milapidia.

The monastery’s church is decorated with beautiful murals. It is worth visiting the ecclesiastic museum, operating since 1988. There is saved the left foot of Saint Andreas. You can still see the ventage from the drop shot of his crucifixion.
The monastery is roofed under the Monastery’s old catholic, the only building saved by the severe earthquakes of 1953.
Today it operates as a female monastery.

It is the most ancient monastery of Kefalonia. It was built during the 8th century in a height of 760m. It has the shape of a fortress and is still saved in a pretty good condition. Holy Klimis was here. The monastery suffered a lot of catastrophes from the 1956 earthquakes.

The monastery was established at the end of the 15th century and according to historic sources was destroyed from the earthquakes in the next century. It was later renovated and operates until our days as a female monastery.
The monastery is only 3km from Lixouri. It was built after a miracle of Panagia. It is said that a shepherd was herding his sheeps in the place that the monastery is today. Suddenly a ram escaped from the herd and went to fountain near a fig. The shepherd followed it, found the icon of Panagia on the fig and took it home. But the icon returned in the place he had found it. Then people decided to build a church in this location.

Near Argostoli are the Katavothres swallow holes where water disappears into underground caverns to emerge on the other side of the island. The water funnelling in and out at each end has been used for generations to power waterwheels. How seas water should continue to flow is really quite baffling and the phenomenon is extremely rare. After all the water should simply find its own level and stop flowing. But flow it does from one end to the other with waterwheels at both ends.

Both Kaligata and Domata are known for good church interiors as well as the local wine.

Around the mountain at Agia Dynami are found goats with silver teeth - a result of minerals that stain the animals' mouths. Not that you can get anywhere near the creatures to take a look.

Markopoulis clings to the side of Mount Ainos and is undistinguished but for the annual ritual of hundreds of harmless tiny snakes that appear around the church every summer. Each August 15 they head for the icon of the Virgin in the church and vanish. A bit like the island's tourists really.